BOSTON OF A DIFFERENT COLOR

This is an example of a black colored Boston Terrier 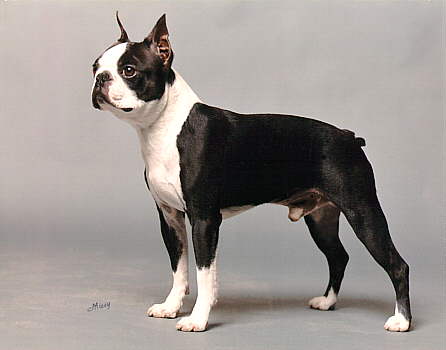 This is an example of a brindle colored Boston Terrier* 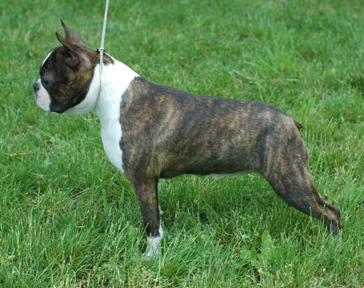 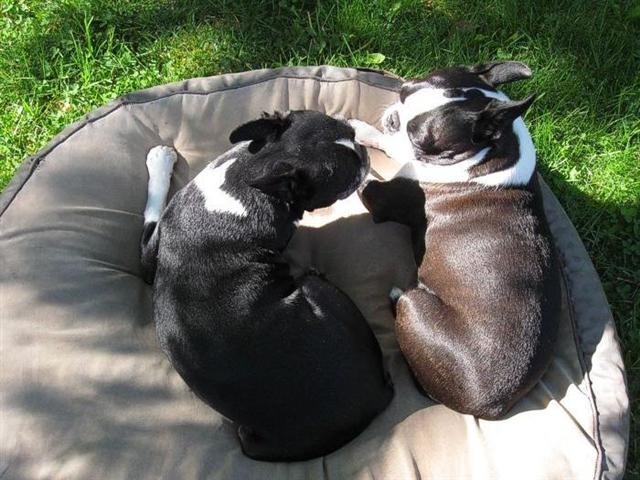 I'm sure you've run across websites or ads advertising different colored Boston Terriers and have seen dogs that typically look like this...

If you think you're looking at Boxers, you're wrong. These are supposed to be Boston Terriers.  Some people are selling dogs like this claiming they are rare, when they aren't, and selling them for insane amounts of money. Let's discuss the history of the Boston Terrier.  The Boston Terrier became a recognized breed in 1893. As per the standard written in 1891....

IDEAL MARKINGS: White muzzle, even white blaze over head, collar, breast, part or whole of forelegs and hindlegs below hocks.

COLOR AND MARKINGS FAULTS: All white; absence of white markings; preponderance of white on body; without the proper proportion of brindle and white on head; or any variations detracting from the general appearance.

And here's what the current standard says about color...

Color and Markings:  Brindle, seal, or black with white markings. Brindle is preferred ONLY if all other qualities are equal. (Note: SEAL DEFINED. Seal appears black except it has a red cast when viewed in sun or bright light.) Disqualify: Solid black, solid brindle or solid seal without required white markings. Gray or liver colors.

Required markings: White muzzle band, white blaze between eyes, white forechest. Desired markings: White muzzle band, even white blaze between the eyes and over the head, white collar, white forechest, white on part or whole of foreleg and hind legs below the hock. (Note: A representative specimen should not be penalized for not possessing "Desired Markings".) A dog with a preponderance of white on the head or body must possess sufficient merit otherwise to counteract its deficiencies.

As you can see, the revised standard has made it quite clear that brindle, which is not a color but a pattern, is preferred.  Liver(which can be another term for varying shades of red or brown) and mouse(which can be another term for varying shades of gray) were disqualifications. However, when different color Boston Terrier breeders claim the some of colors they breed for were around since the creation of the breed, they do speak the truth. In fact, some Boston Terrier history books attest to this...

"One of these was the Jack Reed dog. He was an evenly marked reddish brindle and white dog and weighed between twelve and fourteen pounds.

Another outside dog was the Perry dog. He was imported from Scotland and weighed but six pounds. He was of a peculiar blue color, having some white on him."- "The Boston Terrier" by Arthur R. Huddleton. Page 13.

"A fourth outsider was O'Brien's Ben. He was a short, cobby, lowset, dog of a white and tan brindle color."- "The Boston Terrier" by Arthur R. Huddleton. Page 15.

"When we first commenced breeding Bostons in 1885, the prevailing shades were a rather light golden brindle(often a yellow), and mahogany brindles, and quite a considerable number had a great deal of white. Then three shades were debarred, viz., black, mouse and liver, and although years after the Boston Terrier Club removed this embargo, they still remain very undesirable colors."- "Boston Terriers. The Early Years" edited by Cathy J. Flamholtz. Page 110.

So while different color breeders are correct in that these colors were around since the creation of the breed, a LOT of them fail to realize that unless the brindle pattern was present, the colors were considered a disqualification per the breed standard, were not allowed in the ring and were considered undesireable.  These are examples of brindle dogs with different color base coats.

This is an example of a Mahogany Brindle Boston Terrier 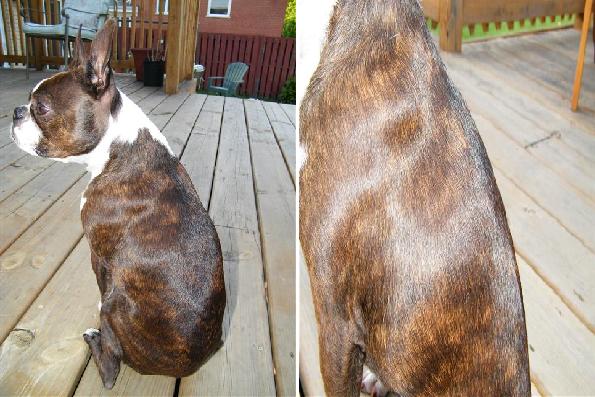 This is an example of a Black Brindle Boston Terrier 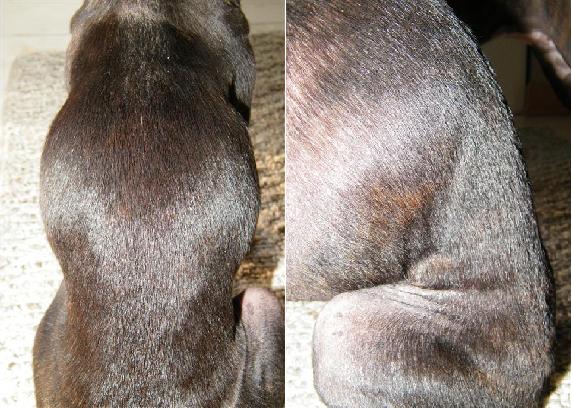 For those who don't understand how standards work, let me break it down to you. A standard is what a breed should look like. People who create the breed have the "perfect specimen" in mind and they write it down and breed to that. A standard can be changed and revised and the way it's usually done is that members of a breed club, such as the Boston Terrier Club of America, agree to it and vote on it with the majority winning.


Now I have no idea why these colors were excluded but *I* think it has to do with expression. Expression is very big in the breed. Some dogs of a different color may have light colored eyes and noses. That may take away from the expression. Here's an example...*** 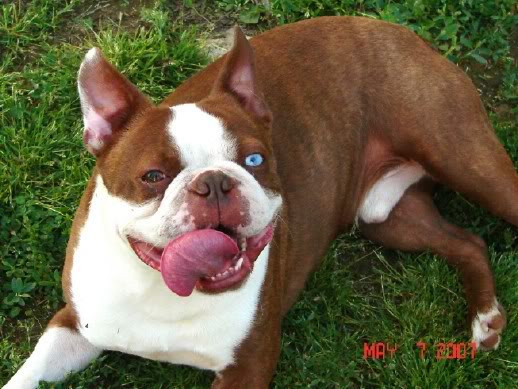 Here's an example of "expression" per the breed standard**** 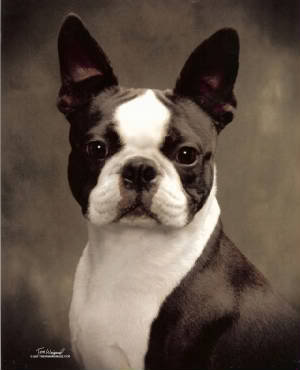 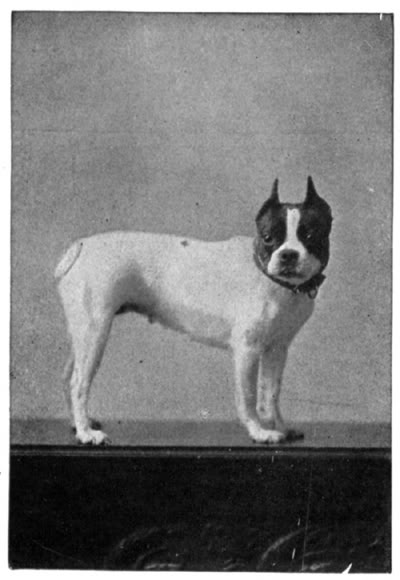 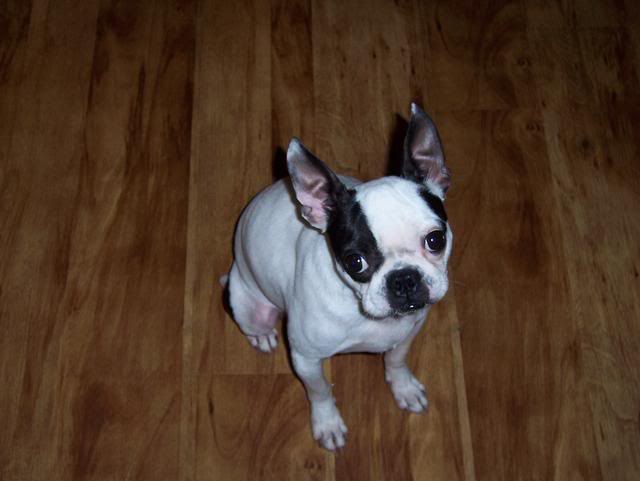 Now there's a thing with white Boston Terriers. A lot of white on a Boston Terrier, especially on the head, may indicate deafness. Deafness was introduced to the breed by the White English Terrier. It is believed that the majority of that breed were deaf and it's the main reason why the breed went extinct. When it comes to Bostons who are blue or lilac,  there's a possibility of Color Dilution Alopecia.

There's been a lot of assumption, usually perpetuated by some different colored Boston Terrier breeders, that the Boston Terrier Club of America is going to recognize these colors and allow them to compete in conformation in the near future. The BTCA is not going to recognize these colors simply because the first revision to the standard made a point to exclude them. Not only that, very few have correct conformation, excluding color.  A lot of them look like miniature Boxers, American Staffordshire Terriers and mixes of those breeds. Look at the pictures I've posted. Some of those dogs have obviously docked tails which leads me to believe either they are not purebreed or someone didn't read the breed standard where it says docking is a disqualification in the breed.

Being that some different colored Boston Terrier breeders have accepted that the BTCA will not recognize these colors, some of them have gotten together to create their own club which is called the All Colored Boston Terrier Club. They created the club as a way for responsible different color Boston Terrier breeders to get together and strive to create different color Bostons with nice conformation in an effort to show that some folks are trying to do right by the breed. These folks are not trying to get the BTCA to recognize the colors, as they respect how the BTCA feels about these colors, so they're going their own route.  The Colored Boston Terrier is considered a separate breed from the Boston Terrier as it has it's own written breed standard. The club is still in it's infancy and they are promoting responsible breeding and are putting on various dog shows. However, as of November 2019, the website looks like it hasn't been updated since 2015.  These are some Colored BT's owned by some of the members of the club...******

While these dogs are obviously very nice specimens, the sad part is a lot of people are irresponsibly breeding for different colored Boston Terriers because they concentrate solely on color. Being that a lot of them charge a lot of money for different colored Boston Terriers, and people will actually pay a high price for them, gives no incentive for them to strive to breed for dogs with correct conformation or utilizing responsible breeding practices such as health testing.

If you are interested in buying a different colored Boston Terrier, please do research! Your best bet is to purchase one from a breeder who is responsibly trying to get the colors recognized by responsibly breeding Boston Terriers that are excellent specimens of the breed, are structurally sound, are utilizing health testing and are basically focusing on the whole package as opposed to concentrating solely on color.

Another option is to try Boston Terrier rescue. Often times, you can find different colored Bostons in rescue who are in need of a loving home.
*SPECIAL NOTE*

As of lately, I've been seeing people ask for "Merle" Boston Terriers. Merle is a coat pattern that's popular among breeds such as the Australian Shepherd, Collie, Shetland Sheepdog and Catahoula Leopard Dog. It looks like this.... 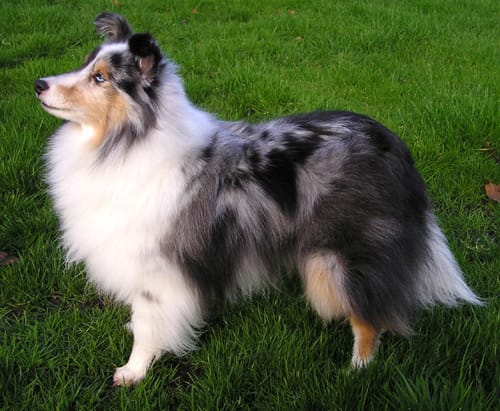 **Special thanks to Colleen from the Woofboard for allowing permission to use Mickey and Seamus picture.

***Special thanks to Rachel from the Woofboard for allowing permission to use Ross' picture.

****Special thanks to Danielle from Campbell Clan Bostons for allowing permission to use Dylan's picture.

*****Special thanks to Jess from the Woofboard for allowing permission to use Samuel Adams picture.

******Special thanks to Jona from Boston Baby Buddies for allowing permission to use Lucy's picture.

******Special thanks to Gabby from Gabby's Fawn Bostons for allowing permission to use Candy and Ace's pictures.

********Shetland Sheepdog picture used from Wikipedia.
For further reading, check out these linkages....

The Boston Terrier Club of America.