LIFE WITH A ROTTWEILER

After owning a Rottweiler for over 12 years, I thought I’d break down my experiences with living with one. Be warned, there's a bit of vulgarity and adult humor in this so consider yourself warned.

Everyone just loves puppies and everyone just loves to show off puppy pictures. Someone will show you a really cute picture of a Rottweiler puppy and you decide you just have to get one. That’s how God gets you. You could be witnessing a little cute plump furball gnawing on a dead body but you’re totally willing to overlook that and bring him home. Although, in Wrigley’s case, he was damn near 30lbs of pure fluff at 8 weeks of age but that’s besides the point. Then it dawns on you that one day, the cute ball of fluff will weigh over 100lbs, sheds like crazy, eats like a pig and you realize you’ve been bamboozled but you won’t do anything about it because you’re attached to him and you’ve grown to love him. 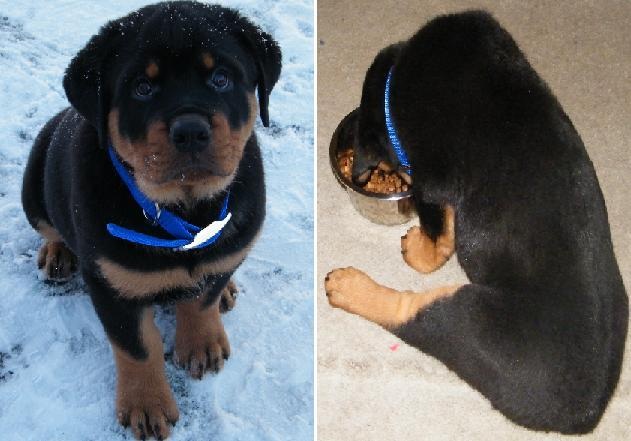 2. You ever hear of Plato? Socrates? MORONS, compared to a Rottweiler!

I’ve always been told about the intelligence of a Rottweiler. There have been numerous times when I’d witness Wrigley playing a game of toss with himself and I’d lose count of how many times he’s bopped himself upside the head with a Nylabone and I’d think “This is intelligence?” That’s when I discovered he was pulling a fast one over me. He was pretending to be a dumb ass when in all actuality, he’s smarter than most people I know. This dog knows how to open up his crate from the outside AND the inside, he knows how to jail break my other dogs out of their crate, he knows how to open up the patio door to let himself in and he knows how to open up the fridge to help himself to Thanksgiving turkey. If you don’t believe me, feel free to view the video evidence…

3.  Wrigley, are you going to embarrass me? Damn skippy!

Despite the fact that Wrigley has been to 4 obedience classes and has been around other dogs and people, he makes it a point in life to act like he doesn’t have any sense and does some mortifying shit that makes me want to have him dig a hole so I can bury myself in it. This includes tuning me out and acting like he’s never heard the word “sit” in his whole life. Barking in a high pitched bark at strange dogs, as a way to get them to play, as if he’s never seen another dog in his life. Being such an attention whore that he’s just got to say “hi” to every person he meets by lolling on his back, which is usually on their feet, in hopes that they’ll rub his belly. I plan on showing Wrigley in Rally Obedience and I’m already having nightmares about his 1st trial. If he doesn’t pull on the leash to go say “hi” to the judge or lift his leg, tinkie all over a station and end it with the “pee pee kick”, I’ll die from shock. 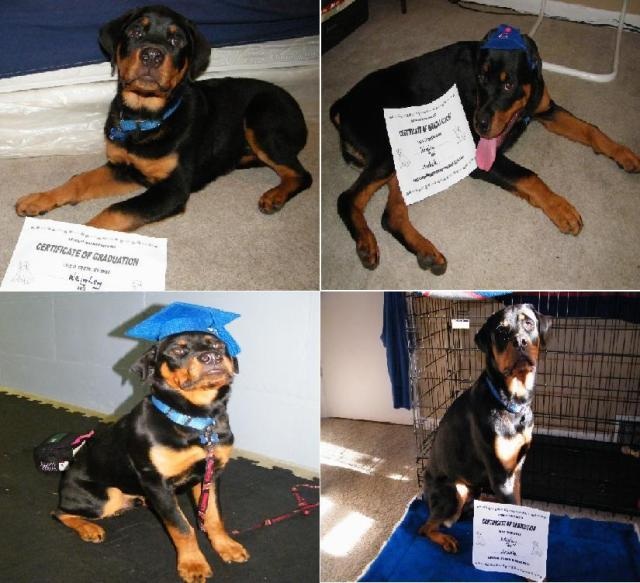 There are misconceptions about Rottweilers being highly aggressive, will kill anything that crosses their paths, killer freaks. I have found that a PROPERLY raised Rottweiler, particularly one that comes from a responsible breeder, and is socialized, especially in obedience classes which I feel is a MUST for a Rottweiler, from the day it comes home is a great dog to own.  I have found that a well socialized and well trained dog knows the difference between friend and foe.  They seem to know that it's cool when your best friend walks in the door unannounced. Let some fool pull that nonsense by climbing through a window and there's a very high chance that his ass is grass and the dog is the lawnmower.  With that said,  most thieves are going to think twice between breaking into your house when they have a 100+lb Rottweiler staring at them from the window. Granted, they don’t know that Wrigley would probably show them exactly where I keep all my good shit but I digress. 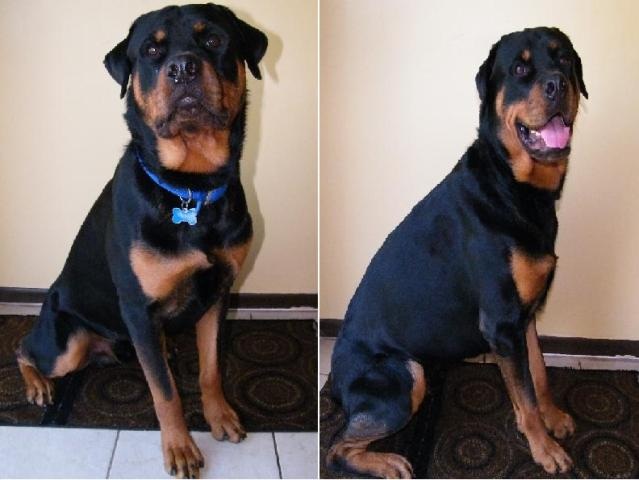 Yep, that is a true conversation I had with some dude when I rolled up to a Redbox, lol. I have found that most men appreciate a dog woman. Even more so when it’s a big dog. Some totally lose their shit when it’s a big muscular breed like a Rottweiler. They figure if you can handle a dog like that then you’re tough as shit, you don’t have time for bullshit and you can handle a challenge.

As a woman, there’s nothing worse than being harassed by some chump who thinks “Do you have some Polish in you? No? Would you like some?” is going to cause my panties to come flying off. If I was in my Hummer, I’d run such a fool over and go on my merry way but alas, sometimes I’m on foot and I’m not carrying a shank on me. None of these idiotic shenanigans occur when I’m out with Wrigley. In fact, such freaks won’t even attempt to make eye contact, either with my eyes or my hooters, and they’ll go as far as to cross the street. They may be nuttier than a bag of squirrel shit however, they know that saying dumb shit to a woman with a Rottweiler may result in the loss of their ball bag.

Not only does a Rottweiler keep the wank pots away, sometimes they even scare normal decent guys. While most guys can appreciate a woman who knows how to handle a big dog, they know that there are hazards when dating a woman with a big dog. This is especially true if the woman regards such a beast as her baby. He might think twice before copping a cheap feel on his woman for fear the dog may take it the wrong way. As far as nookie goes, unless you crate your dog in another part of the house, count on NOT getting any hot action. There’s no bigger cock blocker than a Rottweiler staring a dude down while he’s hitting it. Your man screams in ecstasy. You scream in ecstasy. Your dog thinks you’re screaming in agony. As you can imagine, catastrophic results may occur when your dog attempts to “save you” from that dude who's giving you carnal pleasures.  A man might also find it intimidating to share a full sized bed with a woman and her 100+lb Rottweiler. Especially if the Rottweiler likes to sleep spread eagle and takes up half the bed. Dude won’t even attempt to move the dog for fear the dog may eat him and he won’t even dare ask you to move the dog because he knows that asking you dumb shit like that will get his silly ass banished to the couch. 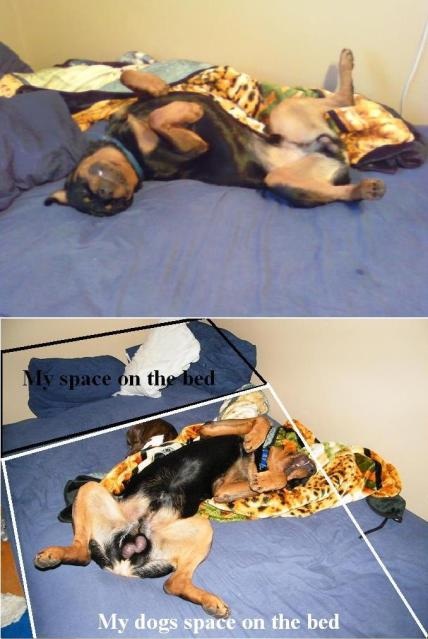 One thing I can say is that Rottweilers are great with children. They seem to tolerate their punk asses better than their own parents. This is not to say that they should be left unattended with children, and this goes for any breed of dog, but I have found that they are extremely tolerant of children, they love the attention children give them, they know they have to be gentle around children and they are more than happy to spend hours playing with the kids. The only hazard to this is that the herding instinct is so hard ingrained in them that they’ve been known to “herd” the kids. Now that I think about it, the next time the kids are outside and they don’t want to come in, I’m going to teach Wrigley to herd and wrangle their disobedient asses back into the house. But yeah, they’re great with kids and such a trait has been written in the “Carl the Rottweiler” books. I have found that Rottweilers are also good with other dogs including little dogs. I had my 1st Rottweiler, Shiloh, for 3 years before I got my 1st Boston Terrier, Souffle. Shiloh was never around small dogs but he knew he had to be gentle around Souffle and he let Souffle boss him around. When I got Shelby, my 2nd Boston Terrier, I was convinced that both Shiloh and Souffle were plotting her death because she was such a pest. Even though she drove him insane, he was extremely tolerant of her crazy ass. Wrigley’s the same way. He’s the baby and he’s under the impression that he’s as small as a Boston Terrier. He doesn’t realize his size so when he gets too rough, he gets his ass kicked and he takes it.

There’s nothing worse than a sick dog. While I haven’t experienced this with my Boston Terriers, as they tend to get sick on the sneaks and do it when I’m not around, I have learned that I could be in the deepest sleep but the sound of a dry heaving dog could wake me from the dead, cause me to leap out of bed, rip the door open, run down the stairs, fling the patio door open and hope to God I did it in enough time for the dog to puke outside. What truly irks the ass off of me about this situation is that it NEVER occurs when I’m having that horrific nightmare of 1000 naked screaming men chasing me and chucking little pickles at me. It ALWAYS occurs when I’m having an extremely highly erotic dream involving me, Vincent Piazza from Boardwalk Empire and a spatula. WTF?!!

I have never met such a loyal breed than a Rottweiler. Unlike my Bostons, who would ditch me for someone who gave them a Scooby snack, my Rottweilers were always at my side. They’d follow me around everywhere. You could be blowing out the shitter, but they’ll lay at your feet and wait patiently for you to finish leading the Browns to the Superbowl. You could be deathly ill and they’ll lay in bed with you and keep you company despite the fact that it’s been 8 hours since you’ve fed them and let them outside. When you’re feeling down, they know something’s wrong and they’ll want to be by you. They can do something that truly pisses you off and drives you to drink but you can’t bring yourself to get mad at them because they’ll have a dopey look on their face that causes you to laugh.  And it’s because of that, I prefer the company of dogs than that of most people. 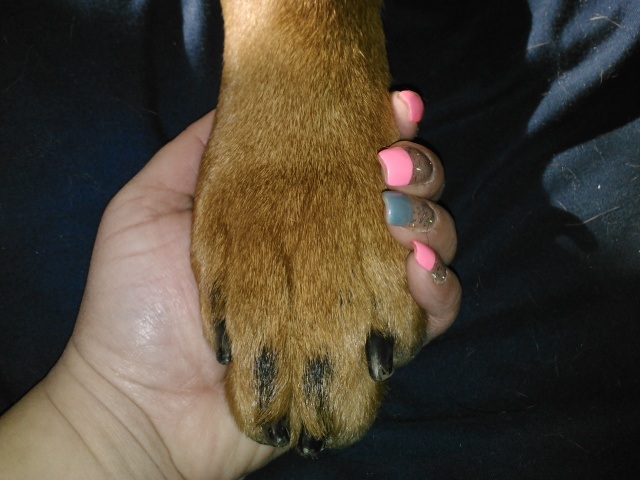 If you thought this was a scream, be sure to check out Life with a Boston Terrier!